It’s a big day for the Brannings and Carters as the families sadly prepare to say their goodbyes to Jim and Stan. Over at The Vic, Linda finds herself supporting Mick when he cuts Dean out of a family photo. However she is thrown when she bumps into Shirley who tells her that Dean is being released and will be at the funeral. Linda is unable to bring herself to tell Mick and heads over to Sharon’s for some support. Later, Buster and Shirley return from the prison with Dean and are shocked when they find Linda sat on her own in Patrick’s living room ready to confront Dean.

She later grows angry when she feels shunned by the Carters and Abi who visits Dot in prison instead of supporting Cora. Having discovered Dot is refusing to go to Jim’s funeral, Cora visits a surprised Dot in prison and it doesn’t take long for the pair to argue. However they soon come to a mutual understanding of each other’s grief. Have Cora’s words convinced Dot to attend Jim’s funeral?

Taking matters into her own hands, Cora returns to The Vic and demands to travel to Stan’s funeral in the same car as the Carter family despite Babe’s frostiness.

Over at the Brannings, Carol struggles to write Jim’s eulogy and turns to a pre-occupied Max for support. The siblings argue when Max announces he won’t be going to the funeral but after seeing how much it means to Abi, he soon changes his mind.
Elsewhere, and with Les away, Billy enlists Alfie’s help with the two funerals but has Billy taken on too much? 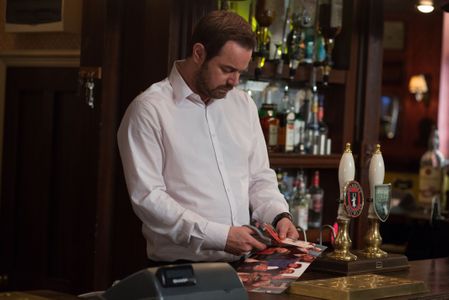