Ian is desperate to get Denise to forgive him, after many failed attempts he enlists Peter to help him.

After he manages her to give Ian and chance and pair get talking they manage to sort things out.

Things are all back on track until they return home to find Cindy Junior's broken in!

Max and Jack find their car tyres slashed and seeing a smug Carl, Max is convinced he is behind it.

When Lauren arrives a bottle of whiskey in an anonymous envelope he's sure it was him.

It all comes to a head when Carl makes a comment at the Vic and Max launches himself at him.

Lauren is pleased to see Jake at counselling but notices he's wearing a wedding ring.

Bianca and Kat make another failed attempt to bag a new guy and eventually admit their better off without.

Kim is getting more and more annoyed with Shirley's complaints about her room.

Despite Patrick's best efforts to smooth things over Kim snaps and reveals to her that it is Phil paying her rent.

Poppy snaps at Alice when she tries to talk to her about Tamwar - she has her own problems.

She admits that Lola's mistake was her fault and finds Fatboy with another girl - this must be Chloe. 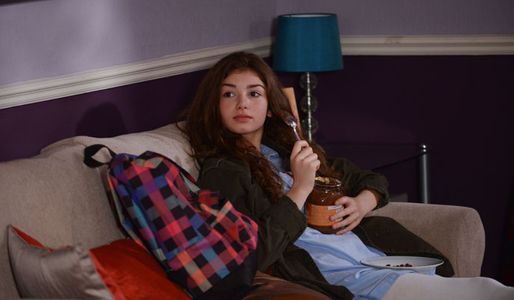 Eastenders 10/08 - Emotions are high at the Beales