Kathy finds herself torn when she goes back to her roots and helps Ian at the cafe. Feeling guilty, Kathy tells Ben she's not sure if she can go through with their plan but he reminds her they need to do this to save Phil. As Kathy takes in the Square, she is confronted by an angry Gavin who asks about the money. After Gavin makes a threat she can't ignore, Kathy returns to the Beale's to find Ian preparing a family meal. Things quickly go downhill causing Ben to storm out and Ian to fear Kathy is leaving again. As Kathy comforts Bobby, Jane shares her suspicions with Ian - is Kathy telling the truth? Later on, Ian drops a bombshell to Kathy.

Kim attempts to carry on as normal with Vincent but Denise can see through her sister's efforts and confronts her. After learning Vincent's mystery woman was Ronnie, Denise comes to blows with Roxy who throws water over her. After some words of advice from Claudette, Kim puts Vincent in his place however she is left confused when he suddenly leaves.

Elsewhere, Pam reels from her discovery but can she stand by Les? After Roxy defends Ronnie to Denise, Ronnie attempts to build bridges with her sister. 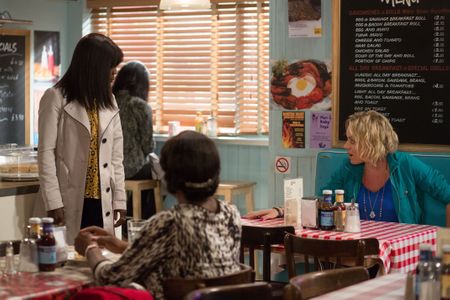 EastEnders 8/10 - Ian and Kathy reel from seeing each other

Eastenders 20/02 - Denise Finds Herself In An Argument With Keegan