Eastenders 20/12 - Bex Watches On As Louise and Shakil Kiss

Bex confides in Stacey about Shakil but gets more than she bargained for when Stacey reveals all to Martin. Things grow worse when a raging Martin goes for Shakil in the Market leaving Bex humiliated. As everyone tries to calm Martin down, a fuming Stacey forces him to apologise to Bex but she refuses to talk to him. As rehearsals for the play get underway, Bex sees Louise and Shakil are forced to kiss as part of the play. Meanwhile, Kush gives Shakil a reality check about his actions.

Kathy fears Ben is hiding his true feelings. Later on, Ben offers to make things up to Kathy and takes her for a drink at The Vic. Meanwhile, the social worker visits the Mitchells and with Phil out for the day, Sharon is left alone to try and protect her family.

Ronnie continues to worry about Roxy. As Roxy plans the hen do, she gets a shock. Abi tells Dot she’s spending Christmas with her mum but Dot declines the invite to join her, insisting she already has plans…​​
​ 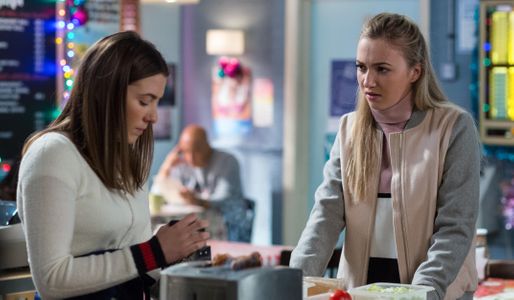