Ian is desperately trying to get hold of Lucy, oblivious as to what has happened. Peter is still hurt by the comment he overheard, but Jane persuades him to go to the family get together at the restaurant. When neither of the twins turn up, Ian storms to The Vic and finds Peter waiting for Lucy. He vents at Peter and Mick chucks Ian out of the pub. After having confided in Shabnam her decision to leave Ian, Denise gears herself up to break the news to him. Later, Ian notices the police heading to his house. They inform him Lucy’s body has been found.

Bianca and Kat tell Whitney to stand up to Lee instead of feeling sorry for herself. When the pair come face to face Lee attempts to flirt with Whitney but she isn’t having any of it.
​
It’s the semi-final of the pool competition and it’s getting intense. Even Aunt Babe is roped in to help! 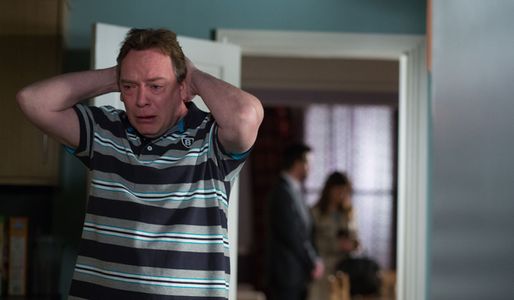 Eastenders 18/04 – Lucy is in serious trouble