After an incident in the Square involving Kim and Pearl, the feud between the Mitchells and Hubbards reaches breaking point forcing Sharon and Kim to step in and take matters into their own hands. At the Albert, Vincent and Phil realise they’ve been set up but can the pair stop their war for the sake of their families? Despite a desperate plea from Sharon, Phil later takes drastic action to destroy Vincent and his happy family.
​
Despite being in pain from her fall, Jane does her best to make Kathy’s Christmas special and invites Ben and the Mitchells over for Christmas dinner. With Phil less than pleased by the suggestion, Ben continues to grow distant from his dad and tells him he’ll go alone with Abi. With the pressure building, Phil takes a bottle of scotch from the Minute Mart causing Shirley to give him some harsh words of advice – but will he listen? Growing ever frustrated at Phil, Sharon agrees to go to the Beale’s for Christmas.

Elsewhere, a nervous Stacey and Kush prepare to tell their other halves the truth about Stacey’s baby but after Shabnam receives some upsetting news, Kush soon has a change of heart but will he be able to stop Stacey from revealing all?

As the Carters prepare for The Vic’s Christmas Grotto, Linda comes up with a plan to help bring Mick and Shirley back together. Across the Square, Dean, Shirley and Buster welcome Jade to the family. 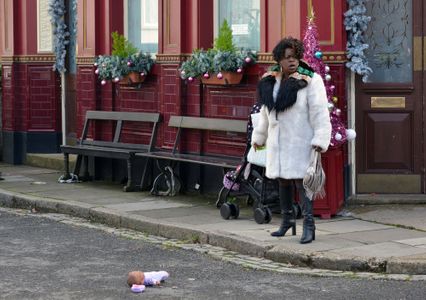 Eastenders 4/06 - Cindy is at breaking point