An angry Ian launches into Max and throws him out of the church as Jane arrives. Meanwhile, after the revelation Ian struggles with his eulogy and leaves the church forcing Peter to take over, paying an emotional tribute to his twin sister.

Back at the house Libby tells her mum things have to change. Unable to face the committal, Ian returns home to Denise where she decides to be honest with him...

As he leaves the church, Tamwar finds a card that has slipped to the floor. When he picks it up he is shocked to see that it says: “Rot in hell”, and puts it in his pocket before anyone else sees.

With Stan and Tina’s contradictory accounts of the past still playing on his mind, Mick suspects Stan is lying and asks him to leave. However when Stan insists it wasn’t him who tried to drown him as a child, Mick loses his temper and throws Stan into the bath, forcing some home truths to be revealed. 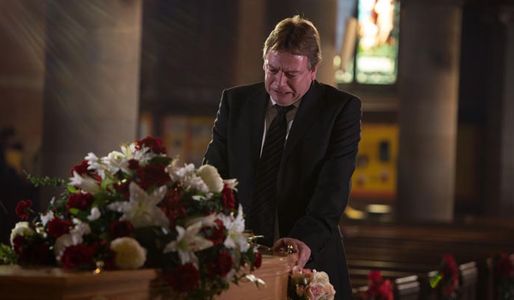 EastEnders 22/10 – Ian is worried about lying in court