It’s father’s day in Albert Square and tensions are high as Buster deliberates telling Dean the results of the DNA test. In the park, the pair discuss being a father and convinced Dean has the right intentions at heart, Buster decides to tell him the results – Dean is Jade’s father. Over at The Vic, Mick and Linda return home with Ollie but their celebrations are disrupted when Dean turns up. After Mick forces them to leave, Buster finally confronts Dean about his temper and warns him that social services will bring up his past if he tries to get custody of Jade. Dean finally cracks and realises Jade is better off where she is but Shirley doesn’t have the same idea and reveals she’s going to get her grandchild back with or without her family’s support.

Elsewhere, Kush comes up with an idea to bring Shabnam and Masood back together and enlists the help of Carmel and Stacey but will it work?

Over at the Beales, Bobby gives Ian a sentimental gift but the moment is interrupted when Carol arrives with Cindy and reveals the truth about her whereabouts. With Ian refusing to allow Cindy back in the house, Jane turns to Carol and pleads with her to let Cindy stay at the Butchers – she can’t lose another daughter.

Martin opens up to Stacey about how he really feels and they agree to take things slowly but later on he announces to Shabnam and Kush that they’re officially a couple, much to Stacey’s shock. Meanwhile, Vincent tries to win Patrick over. 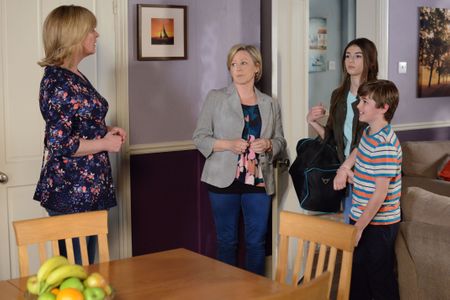