A desperate Martin attempts to leave the hospital with Stacey but when he can’t find a way out, Stacey tells him to stop. As Stacey comforts an upset Martin, she tells him her family would be better off without her leading Martin to share a heartfelt plea. With Stacey back on the ward, Martin heads home determined to find Stacey a mother and baby unit but concerned about his emotional state, Sonia steps in to help. Just as things are looking hopeless, they receive a call to say a bed at a mother and baby unit has been offered to Stacey. Overwhelmed, Martin breaks down and is comforted by Tina, Bex and Sonia.

At the hospital, Stacey contemplates the letter she wrote to Martin explaining how her family would be better off without her but after some supportive words from Dr Forde, Stacey decides not to post it. Martin soon arrives and breaks the news that a bed is available but Stacey begins to have doubts as to whether or not she is going to cope. On their way out, a nurse gives Martin the letter from Stacey assuming he’d dropped it. At the mother and baby unit, an unsure Stacey soon realises the support on offer and cries with relief. Back home, Martin shows Sonia the letter but worried about what it might contain, they all agree it's best not to open it. However later on, Martin can't resist and he decides to open it and gets the shock of his life when he reads what Stacey has written ... Arthur isn't his son.

Meanwhile, Sonia is left touched when Tina looks after Lily and Bex. Across the Square, Kush struggles to carry on as normal and finds himself drinking in The Albert. Sharon opens up to Kush about Phil and tells him Martin is a stronger man than her husband. With her words resonating, Kush decides to stop drinking and pulls himself together. 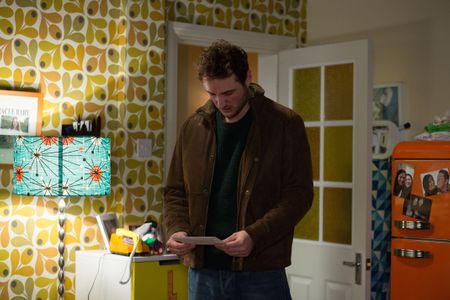