The Vic is stunned by Martin’s outburst and whilst Sonia escapes to the toilets Martin leaves the pub and heads over to the Beales where Rebecca is with Cindy and Liam. Martin launches into a bitter rant about Sonia. Rebecca reels from her dad’s allegations and becomes a pawn between her parents when Sonia arrives and attempts to reason with her estranged husband and daughter. Rebecca and Sonia come to blows and Rebecca tells Sonia she wishes she wasn’t her mum. Sonia tries to reason with Martin and when she is faced with choosing Rebecca or Tina, she makes a decision about her future…

Later, Ian and Jane make a surprise return from their honeymoon forcing Martin to face the reality of his situation and we soon discover that he’s been keeping his own secret.

Kush and Shabnam’s relationship takes another step when he opens up to her about his past; however, she is left feeling disappointed when he tells her that he isn’t ready to re-marry after she begs him to commit.

Over at Donna’s, she is put out by her foster mum’s unexpected arrival with her and Pam both making a fuss following the incident with Martin and Fatboy in The Vic. Donna insists that the two women but out of her love life and that there’s nothing going on with her and Fatboy but she is surprised when he arrives at her door to apologise. 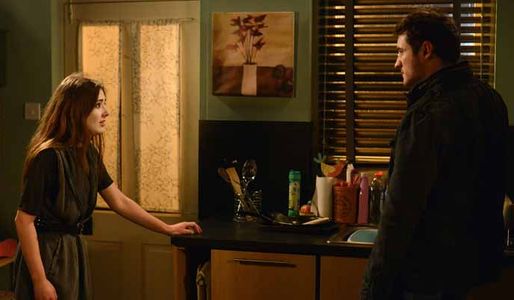 Eastenders 23/03 - Stacey allows Kyle the chance to explain everything