After confiding in Sonia about her ongoing family troubles, Tina pays a visit to Shirley and gives her some home truths. Shirley eventually opens up about the daily torment of having to choose between two sons but tells Tina to return to The Vic.

Still reeling from Babe’s revelation about Stan, Sylvie attempts to visit her family but is quickly stopped by Babe. The sisters come to blows and as Babe continues to manipulate her, Sylvie threatens to call the police and reveal the truth about what happened in the past. However, when Babe reminds her she was also involved, Sylvie suddenly has a change of heart.

Elsewhere, Kim comes clean to Denise about Vincent. Later on, Denise receives a letter about the unpaid bills but after seeing how hard Kim is trying, decides not to tell her. Meanwhile, outside on the Square, Vincent is watching Kim… 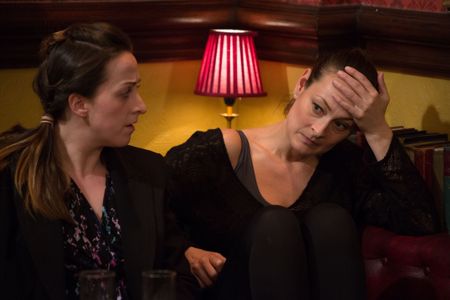 Eastenders 24/04 - Shirley Finds Herself In An Unthinkable Situation