It’s Kush’s 30th birthday and despite his resistance that he can’t celebrate, Martin and his friends drag a very reluctant Kush to The Vic. Tamwar spots the commotion and breaks the news to a disappointed Shabnam but she is relieved when Kush returns home and helps her prepare for the Iftar Drive. Shabnam soon has a change of heart however and tells Kush to go and celebrate with his friends but things take a turn when he finds himself in an awkward situation … handcuffed to the railings in his pants.

Meanwhile, Stacey grows irritated at Martin’s behaviour causing friction between the pair. When he questions her frosty behaviour, Stacey fails to come clean about her illness and instead breaks things off between them. Outside, Stacey rescues Kush and as the tension between the pair rises, they are spotted by Nancy. Worried about what Nancy saw, Stacey confronts her but is surprised when Nancy reveals she’s going to tell Shabnam what she saw if Stacey doesn’t.

With Shirley’s attempts to gain custody of Jade failing, Buster steps up and arranges for them to meet Jade’s foster father, Jonathan. At the café, Buster and Shirley reveal to the father they want custody together and arrange to meet Jade later in the week. Back home, Shirley can’t help but feel guilty for doing this behind Dean’s back but Buster pleads with her not to tell him – but will she listen?

Elsewhere, Jane arranges to have Cindy over for dinner but is left disappointed when she refuses to come. After a drink in The Vic, Patrick starts to come round to Vincent and invites him to his birthday lunch but outside, Vincent makes a suspicious phone call. 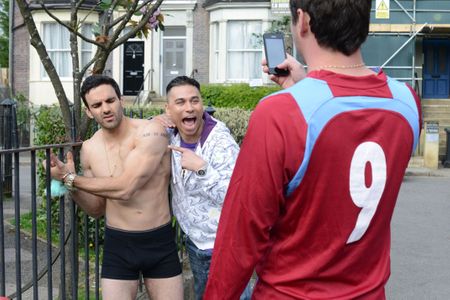 Eastenders 23/06 – Ronnie makes a decision about her life