Bianca's probation period is almost up but Ian is on the warpath after Jean's revelation.

Flustered and scared she admits there were other people involved.

Ian works out it was Bianca and tells her to save her excuses for the police!

It's the moment of Alfie and Roxy's announcement and all eyes are on Kat as she walks in.

Feeling sorry for her, Kirsty lies and tells her she and Carl will never split.

Meanwhile when Kirsty leaves the room Nora's attitude changes - she's cruel and threatening to her son as she informs him to never let Kirsty go.

When someone makes a comment that Janine and Danny are flirting Michael tries to put a stop to it but ends up getting played by Danny - this guy gives as good as he gets.

Abi is annoyed when she realises Cora has taken money from her purse to play poker with Patrick and some friends in the living room.

Dot makes things worse when she finds out and storms over - more arguing is the last thing Abi wants.

Sam suggests they just move in together but Ava's wary of Dexter's feelings.

Despite promising not to Sam tell Dexter that Ava wants him to move in - she can't believe it. 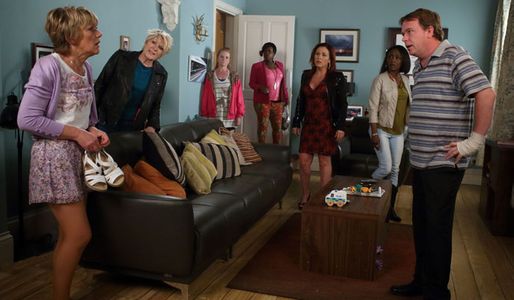