Tensions run high in The Arches as Phil struggles to reconnect with Ben. Phil is stunned when Ben reveals he’s come back to make sure his dad doesn’t marry Sharon as he thinks Phil should be with Shirley but Phil fills him in on his plan. Later, Phil and Ben receive an icy reception when they arrive at his stag-do at The Vic. Panicking, Mick tries to make an unaware Shirley stay upstairs but is unsuccessful and when Shirley spots him she lashes out. However when Mick tells Ben to leave, Phil shows his support for his son by leaving with him. Sharon however is less welcoming to Ben and refuses to let him stay in the house, worried for Denny. Phil overrules and Ben agrees to stay until the wedding.

Irritated that her surprise for Phil fell through, Shirley finds Sharon and Linda at The Albert. A war of words quickly ensues and Sharon throws red wine at Shirley, but accidently hits Linda.

Elsewhere, Dean finds Tosh and promises to talk to Tina for her. After Dean’s confrontation with Ben, him and Shirley share a heart-felt moment.. Later, when a drunk Dean finds Tosh in the flat he has a surprising proposal - he can help her have a baby. 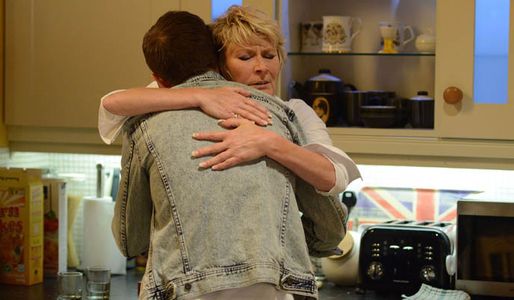