Janine visits Phil to finalise buying The Vic, but Phil reveals he has a better offer, so with the help of David, Janine frantically sells everything she can to raise the cash. Janine reaches her target, but before she celebrate, David plays back her confession on his mobile phone and blackmails her – the £250k is his, or he’s going to the police…

Ian asks for Patrick’s permission to make a romantic gesture to Denise and he gets the wrong end of the stick, thinking that Ian is about to propose. What has Ian got planned?

Peter and Lola want to make their relationship work, so they organise a Christmas Day for the Mitchells and the Beales in a bid to help Ian and Phil get on better. But can Phil be brought round to the idea…?

The Butcher-Spraggan household is thrown into chaos when Nikki arrives with a pile of presents for TJ and Rosie, irritating Bianca.

Carol receives a hospital letter informing her she has an Oncology appointment for Christmas Eve, while Morgan tells David that he thinks there is something wrong with Carol.
​
Alfie throws himself into flat hunting. Kat suggests that they move into No 23 with Mo but Alfie’s pride gets in the way. 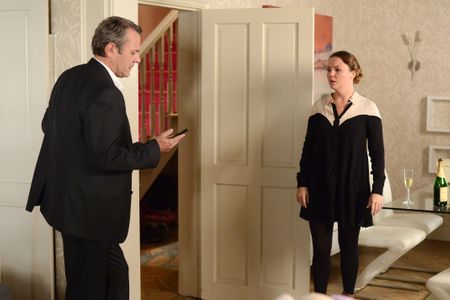