Desperate to talk about her ordeal, Linda seeks out Stacey who urges Linda to tell Mick the truth. However, Linda worries what the truth will do to Mick and their relationship. Later at The Vic, the family are shocked when Johnny makes an announcement. Linda later decides Mick needs to know the truth and tells Stacey that she is going to tell him.
​
Meanwhile, an angry Stacey has finished things with Dean but he doesn’t know why. However, when he learns that Stacey and Linda have grown close the penny drops. After he sees the two talking, he storms over to The Vic to tell Linda to stop lying about him and to convince Stacey to give him another chance. Lee interrupts the conversation to ask what’s going on and Dean drops a bombshell.

Emma returns to show Lauren the video footage she has been given and Lauren is shocked.

Fatboy gives Kush a challenge - to kiss Shabnam by the end of the day. When he learns that Shabnam won’t let Tamwar and Masood have a Christmas tree Kush makes it his mission to change her mind about embracing the Christmas spirit.

Both Nick and Yvonne plead with Dot not to tell Charlie about catching them together. Yvonne assures Dot that Nick will be leaving soon so Charlie doesn’t need to know.

After her kiss with Ian, a confused Jane seeks advice from her ex, Masood. A worried Jane questions whether Ian can really change. Masood gives her some words of advice leading Jane to kiss Ian under some mistletoe. 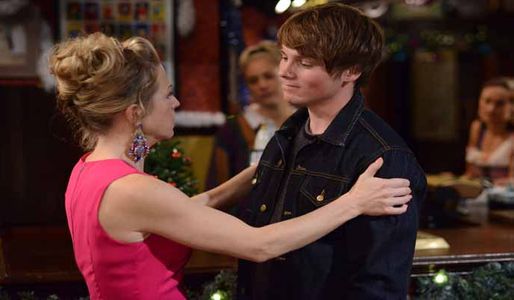