A horrified Martin reels from his discovery and later arrives at the hospital with Arthur. However Stacey quickly clocks on that all is not well and gets the wrong end of the stick forcing him to produce the letter. The truth is out.

It’s the day of Pearl’s first birthday party but Claudette and Kim find themselves at each other’s throats when they both have different ideas in mind. Both women up their game when each interfere with each other’s plans. Later on, Claudette is surprised when her foster-son, Linford, arrives. Although pleased to see him, Claudette is suspicious of why he is really there and he later comes clean. However not wanting Claudette to pull focus at Pearl’s birthday, Kim seeks attention and gets on the bouncy castle. Angry, Claudette gets revenge and secretly stabs the bouncy castle but Denise oversees.

As Gavin lingers in the Square, he makes a phone call to a familiar face. Elsewhere, things become awkward between Abi and Ben and after confiding in Jay, Ben comes clean to Abi – he thinks he has an STD. 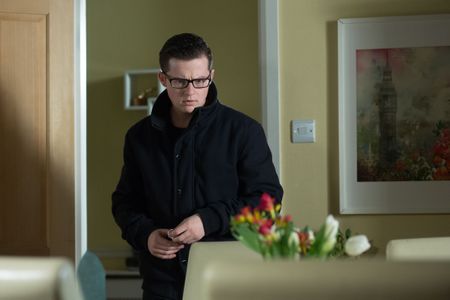 Eastenders 16/10 - A stunned Donna reels from her discovery

Eastenders 27/11 – Denise is horrified by her discovery

Eastenders 17/04 - Martin Is Horrified To Hear Of Bex's Bullying