As Martin struggles to come to terms with his discovery, Kush arranges a surprise birthday party for Shabnam forcing her to hide her worries and paint on a smile. After receiving a touching gift from Jade, Shabnam tells Kush she’s fed up of the questions about Stacey and leaves. At the hospital, Shabnam visits Stacey and realises the pain she is in. Later on, Shabnam tells Martin they need to find a mother and baby unit for Stacey and Arthur.

At The Vic, Nancy is overjoyed by her successful intakes for the week but disappoints Tamwar when she refuses to go to Shabnam’s party and works instead. With another successful night, things begin to go downhill when Nancy and Whitney come to blows over an earlier decision made by Whitney. As the pair fight, Mick and Linda walk in on the commotion.

Over at The Vic, a drunken Phil continues to embarrass himself. After Paul helps carry Phil home, he finds himself alone with Ben. Kathy is taken back when she learns Bobby is leaving tomorrow instead of September and finds herself in an argument with Ian. Later on, Kathy returns and agrees it is the best thing for Bobby. 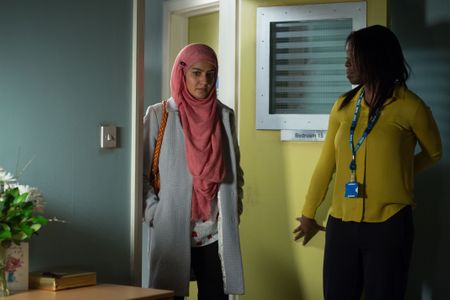