Phil tells Alfie he has to be out of The Vic by midday. Everyone helps Kat and Alfie with their move back to No 23. Wanting to thank them for their help as well as make as much money before they are thrown out, Kat and Alfie run a cheap bar in The Vic.

When Phil hears about this he tries to throw everyone out but Shirley isn’t budging. Phil is firm, telling Shirley to leave but they are interrupted by the arrival of Mick and his family and Shirley takes great pleasure in announcing that Mick is in fact her brother.

Joey warns Max to keep an eye on Jake. Max follows Lauren and soon finds her in a compromising position with Jake. A horrified Lauren looks on as Max warns Jake he will make sure he loses everything unless he ends their relationship immediately, leaving Lauren heartbroken. Later, Joey tells Lauren there’s nothing left for him in Walford so he’s leaving and wants her to come with. Will Lauren go?
​
Bianca is heartbroken after ending her relationship with Terry, despite the fact he wants to make amends.
Ian tries his best to get Peter to end it with Lola but he refuses. Peter pushes his father as to why he must finish with Lola, and discovers it is all down to Phil. 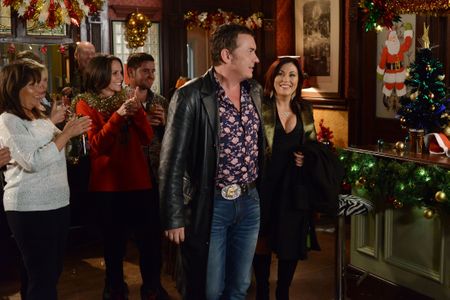