Eastenders 26/7 - ​Martin realises all is not well with Lee

Phil learns the truth behind recent events, but is it what he wants to hear? Meanwhile, Johnny grows concerned...

Billy and Louise break the news to Jay that Phil doesn’t want him helping at The Arches but a disappointed Honey tells Billy he should stand up for Jay. However when Billy returns, he gets a shock. ​Jack attempts to put an end to Richard’s bad habits but finds it more difficult than he imagined.

​Martin realises all is not well with Lee and Lee admits he’s scared about becoming a father. With Martin’s words on his mind, Lee decides to cook a romantic meal for Whitney but panics when he realises the abortion leaflet is missing. Worried that Whitney has seen it, Lee desperately tries to get in touch with her but he soon learns it was Mick. 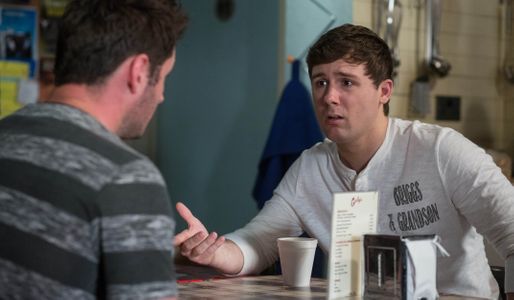