Eastenders 27/04 - Max’s dodgy dealings catch up with him

Max’s dodgy dealings catch up with him when he receives a visit from a panicked Karin telling him the police are on to the stolen cars. Max turns to Phil for help but is unable to get a hold of him so enlists Charlie, Ben and Jay’s help in dumping the cars whilst Carol warns Max to stop pushing people away.

Elsewhere, Phil resorts to unethical tactics to get Ritchie back on side and returns to the Square to confront Max. A panicked Karin soon arrives and reveals the situation is more serious than she first thought and other lots have been raided and Max needs to get rid of all the evidence leading to an embarrassing situation for Max. After Karin leaves, Phil demands that Max signs the Arches back or else he’ll go to the police.

In an attempt to bring Mick and Shirley back together, Aunt Babe prepares a lunch at Patrick’s house and sends Dean and Buster over to Blades. A reluctant Mick arrives for the lunch and Babe’s true intentions become clear when she suggests the only way for the family to move on is if Mick buys Shirley out of The Vic. Later at Blades, Aunt Babe raises a glass for her family but they are startled when a brick comes through the window reminding Dean that Walford hasn’t forgotten what he did.

Meanwhile, Kim’s return to Albert Square with baby Pearl is ruined when she returns to a house overrun with Carters. Denise grows frustrated when Aunt Babe arrives to prepare the meal but when Buster offers her some cash, she realises she has no option. After leaving the Carters alone for their lunch, Kim lays into Denise for taking the Carters in.
​
It’s a tough day for Stacey when she receives a letter asking her to testify in Dot’s trial and later finds herself unemployed after Dean returns to Blades. As Stacey confides in Kat, she learns Kat has received another letter asking her to testify against Harry. Alfie is left disappointed when Ian refuses to let him manage Beales. 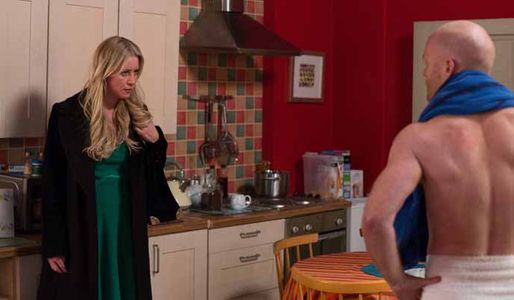