All hell breaks loose for the Mitchells, sending the family into a panic. Pam confronts Les about the cost of Peggy’s funeral but following Pam’s outburst in The Vic, Babe tells them the cost has gone up. Buster leaves a drunken Carmel alone and outside, confides in Kathy about his relationship with Shirley. With Kathy’s words on his mind, Buster suggests a date to Shirley but she tells him she has to help with Peggy’s funeral arrangements. Annoyed, Buster leaves and bumps into Carmel who gives him food for thought, that he should do what makes him happy.Buster then sends a message to Kathy asking her to meet him. Jay tells Honey and Billy he got a job but is all as it seems? 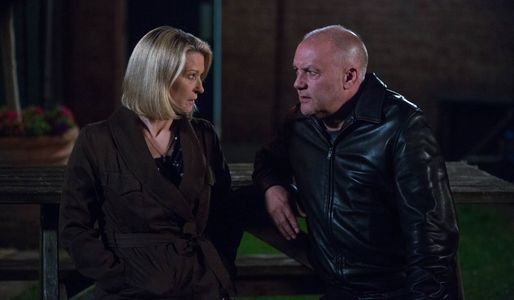 Eastenders 1/12 - A nervous Buster and Shirley prepare for court

Eastenders 27/01 – Shirley is nervous to see her father

Eastenders 06/04 - The Carters are stunned by Buster shock return