Eastenders 28/03 - Everyone Is Outraged By Phil's Drunken Behaviour

Everyone is left outraged by Phil’s drunken behaviour but Babe seizes the opportunity and tells Ben she’ll look after Abi following her fall. Alone, Babe tells Abi her plan and promises her it will work. Despite Phil’s stubbornness, Ben tries to help his dad but they are interrupted when Louise arrives looking for her dad. Knowing the state Phil is in, Ben sends Louise on her way and he turns to Ronnie for help – Phil is in no state to look after the businesses. Ben and Ronnie later return with Ritchie to talk to Phil but Kathy arrives with news about Abi – she’s been to hospital. As Ben rushes off, a livid Phil kicks everyone out of his house: no one is taking over his businesses. Over at The Vic, a guilty Abi tells a heartbroken Ben she’s lost the baby but she is later upset to see him being comforted by Paul. However he soon returns and tells her he has to do something. As a drunken Phil sleeps on the sofa, Ben approaches him with a pillow...

Tamwar stands up for Nancy to Mick and tells him that she needs her dad. Meanwhile, Kush decides that Arthur is better off without him and tells Stacey and Martin he doesn’t want to be in Arthur’s life. Stacey and Martin go to The Vic with Kyle for lunch but with Babe and Abi out, Kyle is roped in to cook. Impressed by his skills, Ian offers Kyle the chance to cook at the half-marathon party. 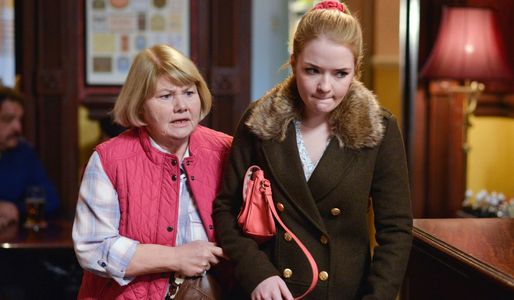