With Nick sat in Dot’s kitchen, Charlie panics and tries to distract Dot. Nick gives Charlie and Ronnie an ultimatum. The two realise that the only way to get that kind of money would be to ask Phil. Despite Charlie’s reluctance, he goes to Phil’s and pleads for the money but refuses to explain why.

When Rebecca asks to move in with Carol, Carol confronts Sonia to find out what’s going on. Carol is appalled to discover that Sonia emotionally blackmailed Rebecca and goes to phone the music academy to re-arrange Rebecca’s audition. Feeling pressurised by the situation, Rebecca asks her not to. Sonia snaps at Carol telling her that she doesn’t want her marriage to fail like Carol’s and leaves with Rebecca.

Stacey finds an upset Tosh in the flat and decides to call Tina and tell her the truth about the baby. Tina immediately leaves The Vic and goes to Tosh. She tries to make Tosh feel better by telling her that it was probably for the best - it could’ve been awkward if her nephew was the father. Tosh suddenly snaps at her and accuses Tina of sleeping with another woman. In the heat of the moment, Tina slaps Tosh and Tosh retaliates by punching her.

Ben tries to diffuse some of the tension between himself and the Carter’s by challenging Johnny to a game of darts leading Johnny to wonder if Ben fancies him. 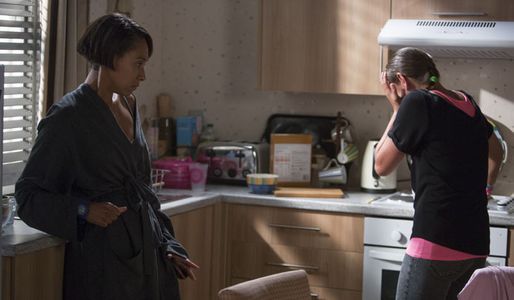