Ian’s shock at Denise’s discovery soon turns to anger when she tells him why they haven’t rung the police yet. After letting the news sink in, Ian eventually decides to call the police …

As they wait for the police to arrive, Ben turns up demanding to speak to Ian. The group leave them alone and Ben confesses to his actions on the night of Lucy’s murder – what did he do? When the others leave, Ben begs Ian and Jane to not tell the police, just as they knock at the door – what will Ian do?

Ben storms out into the market and bumps into Johnny. Reading the situation wrong, Ben tries to kiss Johnny but is rejected, only worsening his mood and he runs off.

At The Albert, Lola is brought in to cover for Ben and Jay. Abi arrives looking for Ben and Lola tries to make amends. After assuring Abi nothing is going on with Jay, the pair finally clear the air. Abi then blurts out that she is seeing Ben, much to Lola’s surprise. 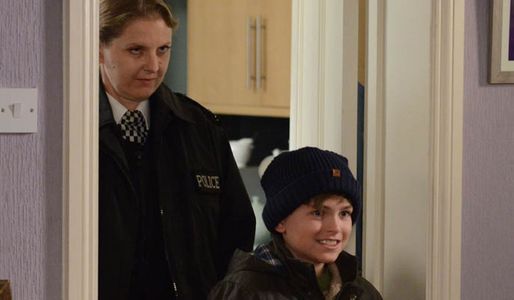