Ronnie gets a shock when an estate agent arrives to value No.27 but tells Jack they can’t sell the house. After an insistent Jack lets slip of his plan to a fuming Roxy, Ronnie forces him to sort out the mess and refuses to sell the house without her sister’s blessing. Jack pays a visit to Roxy and shares some kind words; promising her half of the money from the house leaving Roxy to contemplate the idea – but will she agree?

Kathy is taken aback when environmental health arrive to assess the café. Elsewhere, Louise notices Shakil has stopped wearing his chastity bracelet and after learning everyone at school is gossiping about Bex, she offers some advice to her. Rehearsals for the Walford Players Christmas Show are well underway but Kathy and Geraldine struggle to see eye-to- eye.Tensions simmer between Whitney and Lee.​ 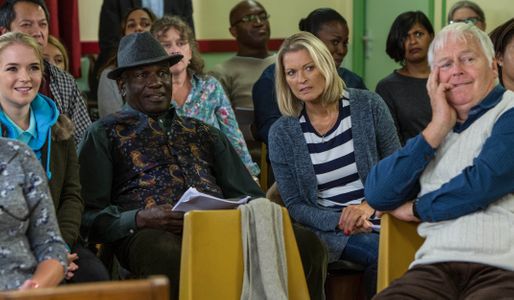