Les and Pam desperately try and find the money for Babe but with the Mitchells refusing to pay the high costs of the funeral, Pam is forced to make a dangerous decision that puts their whole business at risk – will her plan work?

Mick prepares an early birthday party for Linda but as the party commences, things quickly fall apart when Pam arrives and tells Babe she doesn’t have the money leading Babe to imply she’s about to reveal Les’ secret. Pam jumps in knocking a frame to the ground, believing it to be a photo ofChristine – but can she stop Babe in time? Pam arrives home to find Les dressed as Christine but as Pam begins to fall apart, Les has a heart attack.

Meanwhile Roxy tries to assure Jack how serious she is about changing for the good. Denise warns Carmel to stay away from Buster but later at The Vic, she implies going out on a date. Meanwhile, Buster tells a torn Kathy he wants a decision today – does she wants to be with him or not? Denise tells Kush she wants him to be her trainer.​​ 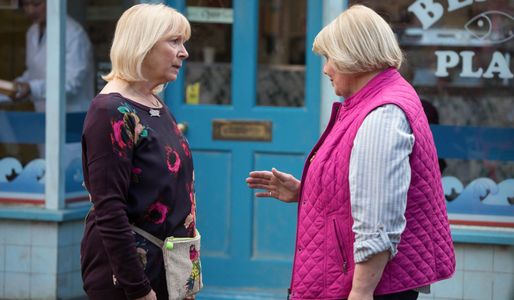 Eastenders 01/12 - A Suspicious Roxy Clocks Jack And Honey Together