Eastenders 29/05 - Charlie heads to the hospital to confront Ronnie

Charlie heads to the hospital to confront Ronnie about Vincent but is stopped in his tracks when she reveals she’s coming home today. Back home and finally alone with his wife, Charlie asks her about Vincent. After a run-in with Vincent, Phil later arrives and tells Ronnie they need to sort Vincent once and for all for but Ronnie has another idea in mind.

At the bar, Phil tells Claudette about Vincent’s run in with the police but she refuses to rise to his stirring and instead warns Vincent to stay away from him. Vincent quickly tries to get one up on Phil and tells him he needs money to stay quiet about Carl White.

Elsewhere, Masood continues with his quest to make amends with Shabnam but she refuses to listen. Later on, Kush tells Masood to stop moping and to bring his family back together giving Masood an idea.

Donna encourages Liam to step up and he follows a drunk Roxy to the Albert but soon chickens out and instead asks for some of her drink. Sharon later spots the pair drinking outside and angry she quickly puts a stop to it. However it soon transpires that a critic for Walford Gazette has witnessed the commotion – is Sharon about to lose her licence? 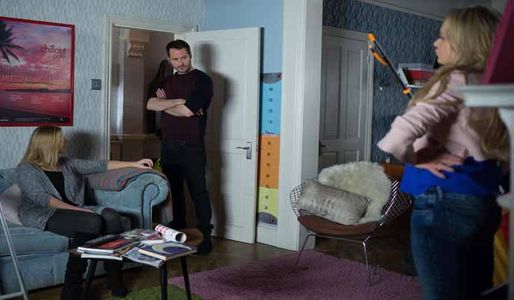 Eastenders 22/05 - A Nervous Denise Heads To Her Exam