Whitney is still trying to cope with the news of Tony's passing but after advising a worried boy at the community centre she starts to see things differently.

Later that evening she tries to talk to Tyler about everything but it ends in disaster when he accidentally calls her messed up.

She storms out without her engagement ring.

She ends up in R&R flirting with Joey behind the bar; after some resistance from him the pair end up kissing and head back to his place.

Kat's busy keeping up appearances about Alfie and Roxy's engagement.

Michael persuades Janine to let him look after Scarlett and even arranges to spend the evening with her.

Things don't go to plan when he's late to meet her and he finds her organising a play date without his help.

Lucy helps Peter out at the chip shop but Lucy makes a swift exit when Ian comes in making snide comments towards her.

Meanwhile, Fatboy is torn between spending time with his best mate Tamwar and Poppy. 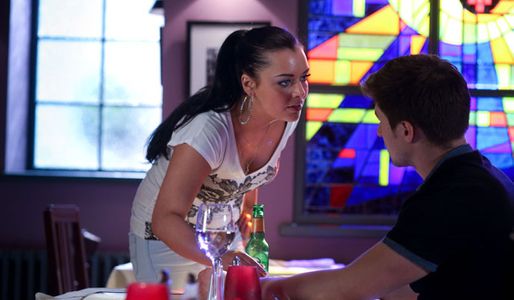