It's Halloween in Albert Square and with Gavin still on their mind, the Mitchells and Beales remain on edge. Just as things are beginning to look up for both families, things take a haunting turn and Kathy, Ben and Phil soon find themselves in a terrifying situation with no escape. As those involved attempt to save themselves and each other, a shocking truth emerges …

Elsewhere, as Martin tells Kush about his plans to propose, Stacey makes the final preparations for her party. Things take an unexpected turn however when Stacey comes across an engagement ring and tells Whitney she can't get married. Whilst Lee fixes a faulty fuse in her flat, Stacey meets with Martin and tells him she doesn't want to get married causing Martin to share a heart-felt plea - what will Stacey decide? As the party begins, Martin proposes to Stacey in his own unique way but the proposal takes an odd turn ... As the party commences, things take a scary turn when Stacey is electrocuted by the fuse Lee failed to fix. As Stacey is rushed to hospital, everyone desperately waits to hear if she is okay. Meanwhile, Whitney attempts to comfort a devastated Lee following the accident.

Across the Square, Mick’s plans for Halloween are faltered when Linda refuses to dress up and join in with the celebrations. Mick comes up with a plan to change Linda’s mind and challenges Aunt Babe and Elaine to make their own Lily Munster costume but who will come out on top? Disappointed by the outcome of the Halloween celebrations, Mick attempts to get to the bottom of what’s wrong with Linda. After some encouragement, Linda finally shares a painful truth to Mick about how she's changed in the past year. Feeling powerless, Mick takes matters into his own hands. 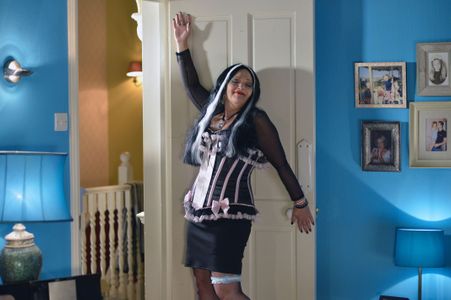