Yvonne returns to Albert Square and goes straight to see Charlie who is busy organising the engagement party with Ronnie. The awkward reunion is interrupted when Dot reveals that she thinks Nick is still alive and shows everyone the cigarette butt which is Nick’s favourite brand.

Elsewhere, Sonia arrives at Carol’s and apologies for what she said. The two make amends as Sonia reveals the truth about her relationship troubles to Carol – does Martin still love her? Kush announces his ideas for the calendar but upsets Carol when he suggests that everyone in the pictures should be naked. When Sonia says no one would dare do that, Kush decides to prove a point…

Stacey finds Tina covering a black eye with makeup and she immediately knows that it was Tosh but Tina desperately tries to defend her. Dean and Stacey both tell Tina she can’t let Tosh do this to her. She listens to them and decides to talk to Tosh about it.

After accidently breaking the tail light on Mick’s car, Johnny goes to The Arches and asks Ben and Jay if they can quickly fix it. Johnny is confused when Ben asks for more money to get the car fixed quickly – does Ben actually fancy him? Abi confuses Johnny even more when she hints that Ben has a girlfriend.

It’s the day that Peter leaves for New Zealand but Lauren is shaken when she notices the same car following her again. 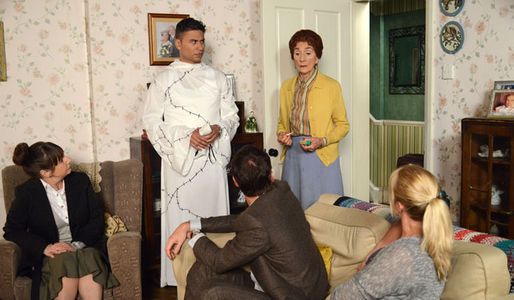