It’s Halloween in Albert Square and The Vic has been given a spooky makeover ready for Ronnie and Charlie’s engagement party. Things get off to a good start when Phil and Charlie make amends but Charlie becomes worried when Dot suddenly leaves. After Sharon reveals Dot believes she’s seen Nick’s ghost, Charlie abruptly leaves the party to go and find her. Charlie goes back to Dot’s house where he is confronted by Dot who asks if Nick is still alive – will Charlie admit the truth?

Lauren returns home after feeling like she’s being followed. Abi is not impressed as she has a night planned with Ben and things grow worse when Ben suddenly turns up and asks why Johnny thinks he has a girlfriend. When Abi tells Ben it was her fault, Ben storms out leaving an upset Abi. Both feeling alone, Lauren suggests to Abi that they should spend Halloween together. This is short lived however when Emma arrives and encourages Lauren to go back to The Vic. Outside, Lauren still feels like she’s being followed and turns around to discover a spooky figure with a weeping angel mask is following her. Lauren chases the figure.

Back at The Vic, Ben makes it clear to Johnny that he doesn’t have a girlfriend but that doesn’t make him gay. 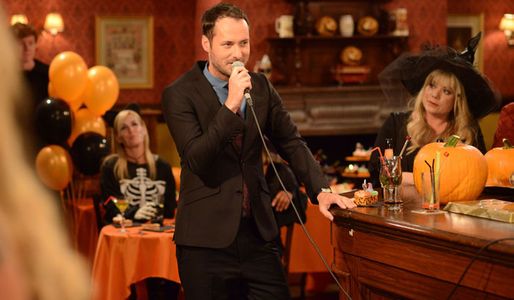