Ronnie’s heart races after a heated visit from Vincent and she is forced to ask him to stay away from her. Later, Roxy panics when she and Charlie are summoned via text by Ronnie – is she going to tell Charlie she knows he and Roxy have slept together? Later on, Charlie arrives and reveals Dot’s court case has taken a turn - there’s a new witness testifying against Dot – the dealer who sold Dot the drugs is claiming that Dot told him it would be better if Nick was dead. Ronnie assures him everything will be okay and turns to Phil for help.

It’s a difficult day for the Fox sisters when the bailiffs arrive to warn Denise and Kim to pay their bills. As Denise goes for an interview at McKlunkys, Kim steps up and heads to the job centre but she is soon stopped by Kat who tells her that Vincent is looking for her. A terrified Kim insists on leaving Walford despite Kat’s pleas but it isn't long before she comes face to face with Vincent.

Aunt Babe continues to manipulate the Carters and offers to buy Shirley out of The Vic. After Linda flatly refuses, Babe puts a plan into motion causing further friction and Linda soon realises they have no option but to accept Babe’s ‘help’. Outside, Buster learns the truth about the incident at Blades.
​
Bex treats Sonia to a birthday present but is upset when she learns that her dad, Martin isn't invited to the birthday dinner. After coming to blows with Martin, Sonia later arrives to find he’s filing for divorce. 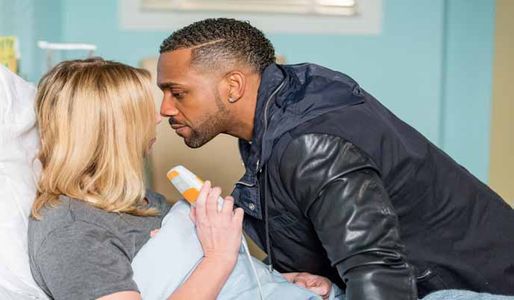