Eastenders 4/06 - Cindy is at breaking point

It’s the day of the Beale’s visit from the social worker but with Cindy at breaking point, Ian and Jane are on tenterhooks. It doesn’t take long for Cindy to crumble and come clean about her feelings – she wants to be as far away from Beth as possible. Cindy’s world spirals when the social worker reminds her that Jane and Ian can offer a stable home for Beth and that is the priority forcing Cindy to give Jane and Ian an ultimatum.

It’s Pam’s birthday and after making his Nan breakfast in bed, Paul heads to The Albert where Vincent and Claudette agree to throw a surprise party for Pam. Les is immediately suspicious of Paul’s intentions and warns him to not upset Pam. Later at The Albert, Pam senses the tension between the pair as they talk about Claudette and she soon runs off in tears – does she know the truth?

Lola has an awkward encounter with Abi after she asks how to impress Ben in the bedroom. Later, Ben finds Abi waiting for him and ready to impress. Ben is initially reluctant but after seeing how much Abi is hurt and confused decides to go for it and they passionately kiss. 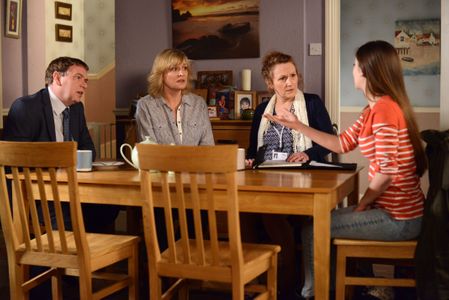