As Kat prepares for Mo and Charlie’s visit, she becomes suspicious of Stacey’s behaviour. When alone, a fuming Stacey tells Kat to back off but can Kat convince her otherwise? Later on, Sister Judith arrives to collect a donation from Kat and Stacey makes a decision …

Meanwhile, the man who had been following Stacey turns up in Albert Square with his friends, looking for Stacey but with his nerves getting the better of him, he quickly leaves. However later he bumps into Stacey and drops a bombshell .

After an explosive new year, the Carters remain on-edge and for one family member, things continue to go downhill when they are forced to put the past behind them once and for all. At The Vic, Tamwar tells Nancy he’s spoken to the Imam but he is left disappointed by lackluster response. After confiding in Masood, Tamwar confronts Nancy and she admits her reservations.

After receiving a call from his doctor, Alfie goes to the hospital. It’s the day of Shabnam’s next hospital appointment but Kush grows concerned when she goes missing. 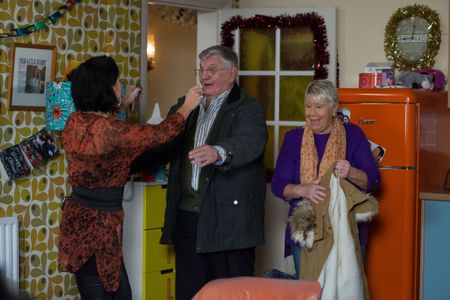