Phil arrives home from hospital and despite Ronnie’s pleas he is determined to have a drink. When he tries again it is Honey who steps in and remarks to Phil about how much Ronnie has done for him this past week.

Honey goes for a job at the Minute Mart and is thrilled when she is offered a trial period. Billy asks Honey to move in with him but although Honey says she would love to, she tells him she can’t just yet as she wants to help Ronnie. Billy tells her that Phil is not her problem but Honey is adamant that she wants to support Ronnie as she has had such a horrible week.

Knowing Shirley is going to see Dean, Buster is at his wits end and not knowing what to do he asks Denise to talk some sense into her. Shirley is not happy but when the two women talk, Denise opens up about Lucas and how he wants her to visit today. Shirley thinks Denise is mad but she insists she is not in love with Lucas but she is worried about Jordan. Later, the women both wait in the prison room. When Dean arrives he is pleased to see him mum but how will he react to her plea? Meanwhile, Denise is about to leave when Lucas arrives and despite herself it is clear she is still enamoured with him. As Lucas tells her how much he thinks of her, Denise remains firm despite Lucas doubting her. As Denise goes to leave, Lucas reels her back in with his fears about Jordan telling her that she is the only one that can save them both.

Still heartbroken and embarrassed about what happened, Nancy hides away in The Vic. When she finally ventures out she bumps into Tamwar but despite his apologies Nancy is unforgiving. Later, Nancy is surprised when Shabnam arrives and tells her that Tamwar does not know she is there but she insists that her brother is a good man. Nancy later goes to see Tamwar – is this the end for Nancy and Tamwar?

Shirley arrives at The Vic and tells Mick and Linda that Dean’s plea hearing is at the end of the week. Linda is adamant that she doesn’t want to go – it’s Roxy’s case not hers and besides Dean could still walk free.

Despite Kush’s insistence that he does not want her to go, Shabnam remains firm and searches for her passport. Denise confides in Masood that she has been in touch with Lucas but they are interrupted by Shabnam who gives Masood a piece of her mind after punching Kush. Later when Tamwar opens up about Nancy, Shabnam tells him about Arthur. When she sees Buster with Jade and she tells Jade that she is going away and doesn’t know when she’ll be back she is hurt by Jade’s reaction. Shabnam talks to Masood who once again tells her that she doesn’t have to leave her daughter again as she will regret it… Shabnam later goes to goes to see Kush and asks for a favour. Will Shabnam change her mind? 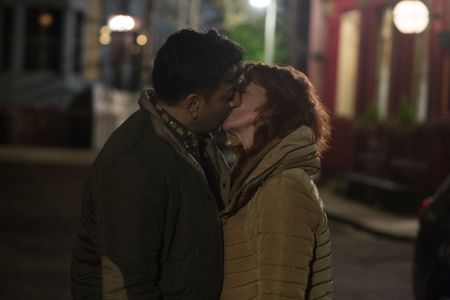