Bianca is worried waiting for her test results, but Terry tries to help her out by taking care of the kids. David is unconvinced about Terry’s selfless acts, but is eventually impressed. Later, Terry tries to comfort a miserable Whitney who is still down about Johnny, but his kindness is misinterpreted when Bianca walks in and sees them. She explodes and throws Terry out before he can explain.

Linda is pleased Lee is home and he settles into life at The Vic quickly. Johnny is relieved when Lee tells him he always knew he was gay. Mick is also pleased Lee is back, but he questions his actions and Lee eventually admits why he didn’t return straight home, what is he hiding?

Ronnie sorts out a date with Roxy and Aleks which goes well, leaving Ronnie panicking that she’s losing control of her sister.
​
Jay finds out Abi has been offered a place at the University of Liverpool, and is shocked when she suggests he go with her. Meanwhile, Ian remains unsupportive of Lucy’s plans, even when her and Lauren’s business gets its first success. 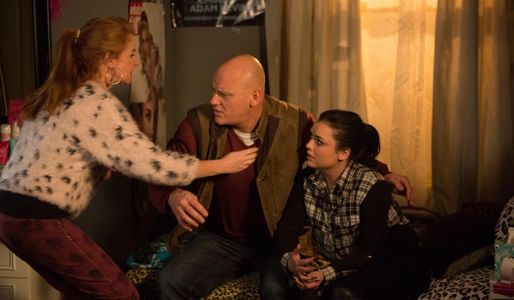 EastEnders 04/07 – Jean, Shirley and Bianca start a fire at Scarlett’s