As Charlie, extremely unwell, lies on the sofa, Kat steps up and takes control as they wait for the ambulance. Charlie tries to talk to Kat, and as he asks for her forgiveness for the past, it all becomes too much and she goes to wait outside for the ambulance. Sharon spots Kat and realising that something is wrong she encourages Kat to go back inside to be there for her dad. The paramedics arrive shortly and announce that there is nothing they can do - Charlie has died.

As an erratic Stacey rushes out fearful for her son’s safety, she runs to Dot’s for help. Dot quickly grows concerned about Stacey's behaviour and goes to find help. While Dot is distracted by the ambulance outside the Slaters, Stacey rushes out and sees Kat who breaks the news that Charlie has died. With her world crumbling and her psychosis intensifying, Stacey sees Charlie’s death as another sign that they are in danger.

Back in the Square, Kat learns of Stacey’s extreme erratic behaviour and realises she has gone missing.

Shabnam continues to bond with Jade and as she helps her with her physio. Later on, Alfie has his scan…

As everyone struggles to come to terms with Charlie’s death, Kat finds her mind elsewhere when Stacey is still missing. At the allotments, Stacey calls the man who had been following her and who realising something is seriously wrong, suggests they go somewhere warm. After finding a cafe, Stacey suggests they should go away together but when she insists on leaving now, he realises all is not well and when she is not looking he takes her phone and calls for help.

Nancy is left confused when customers don't like the food – and she works out Babe had a part to play. 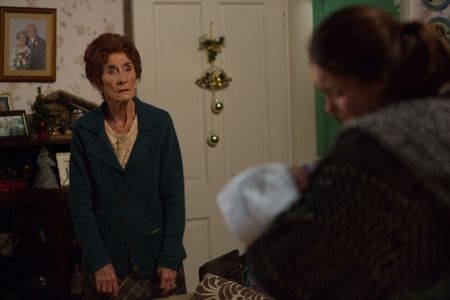