Denise is left reeling from Jordan’s bombshell and soon comes to a shocking realisation. Jordan begs her to come with him to get Lucas but they are interrupted by Libby who senses all is not well. Denise assures Libby everything is fine but as she leaves for the family meal, Denise secretly sticks a note on to her bag telling her of Jordan’s plan but Libby fails to notice. Alone, Denise agrees to leave with Jordan but he soon realises she’s just stalling. With his plan to reunite the family falling apart, Jordan snaps. Worried, Denise stands her ground and warns him not to get caught up with Lucas but will Jordan listen?

Claudette reels from her actions but is this the end of Gavin? Vincent soon arrives forcing Claudette to cover but he quickly clocks on that there is much more to her story and he begins to question his mother. As the shocking truth comes out, all hell breaks loose.

Mick and Linda rush upstairs to learn that Ollie’s highchair was knocked over in the fight but he seems fine. As Linda and Mick reflect on the incident, Mick wonders if it means the pair will stop their fighting but his hopes are thwarted when Lee and Nancy start again. Fuming, Mick snaps and after smashing a chair on the floor, throws the pair out of The Vic. Elsewhere, Ronnie spends mother’s day with Honey but after Honey touches a nerve, Ronnie storms off. Back home, Tim, Joel’s brother, arrives and gives something he says Joel would want her to have. 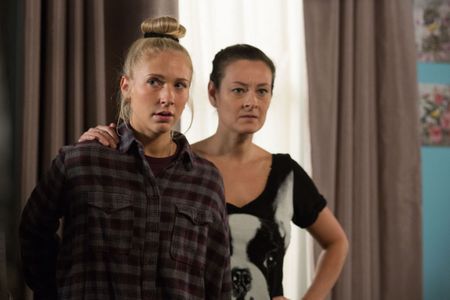