Ronnie is stunned to learn that Charlie has been planning Nick’s funeral and he plans to attend the service alone today. Ronnie offers to go with him but he refuses forcing her to turn to Ben for help. Ronnie arrives at the crematorium but is upset when she spots Charlie with Roxy and quickly leaves. Back home, Charlie fails to come clean to Ronnie about attending the funeral with Roxy and in a moment of rage, an upset Ronnie smashes her wedding photo.

Over at The Albert, tensions are high when Kim interferes with the bar and insists her cocktails go on the menu. With the pressure on, Phil encourages Sharon to fight for the bar she built and they decide to hold a cocktail competition – whoever sells the most wins. Later on, it’s clear both Kim and Sharon are playing dirty when their families arrive and neither accept defeat. After some words of encouragement from Phil, Sharon has a proposition for Kim – they open a separate bar upstairs and whoever is more successful, runs The Albert.

Masood is stunned to learn from Shirley that Shabnam has told the Carters her daughter died. With the revelation playing on his mind, Masood comes clean to Tamwar who defends Shabnam’s decision and tells his father not to mess with her life. Later on, Shabnam and Kush host a dinner for their friends and ask Martin to be Kush’s best man but Masood struggles to not say anything. Meanwhile, Tamwar encourages Masood to get the paperwork in order for his new stall “Masala Masood”.

​With Business at Blades struggling, Dean is furious to hear that Lola left her shift to go for drinks at The Albert and decides to fire her and hire Paul as the new trainee. Fatboy visits Dot in prison after learning she’s not allowed to attend Nick’s funeral. As Nick is put to rest, an upset Dot says goodbye to her son from her prison cell. 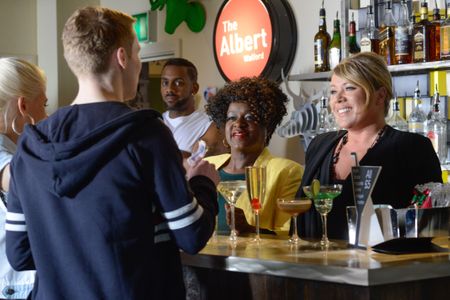