Linda prepares for a big night in The Vic as host of The East London Lady Publican’s event. Determined to make a good impression, Linda insists on managing the night herself and tells a frustrated Nancy she needs to rest instead of helping out. Mick goes to see Shirley and asks her to help out but soon suspects that all between Buster and Shirley isn’t well. After Linda ships off Mick and Lee for the night, they go round to keep Buster company but they get a big shock, he is packing to leave.

Carmel runs into Denise in the café and the pair bond over their worries. Denise opens up to Carmel about trying to find Jordan and Carmel tells Denise if Jordan doesn’t want to be found then it might be best to let it go. But a disheartened Denise is determined to make contact and Carmel shows her a way she can check on him, but Carmel warns that once she opens that door, there is no going back. Later on, a worried Patrick and Kim encourage Denise to move on from Lucas and Jordan. But after Patrick confesses he told Gloria not to call Denise, and tells Denise if she goes to meet Jordan she is on her own, Denise packs up and moves back over The Square. After some wise advice from Carmel, Denise agrees to stop chasing Jordan and makes up with Patrick and Kim. Later, Denise is shocked to find Jordan waiting for her and he tells her she needs to leave him alone.

With Abi due home, Ben finally prepares to tell her it’s over but after she arrives home with an injury from her skiing trip, he decides to wait. Meanwhile, Paul has his first day on the flower stall and Pam takes him for a drink to celebrate but arrives to find Ben and Abi happily talking. Outside, Jay bumps into a stranger, Linzi, who he gets talking to at the café. Meanwhile, a determined Carmel has an idea of how to help Kush, and begins to re-decorate the nursery but Kush doesn’t react well. 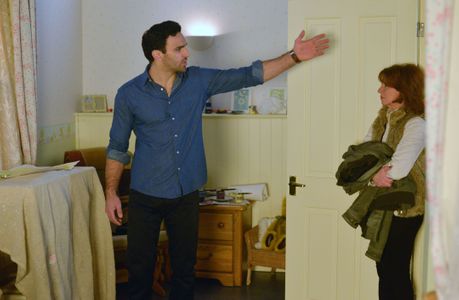