Ronnie’s paranoia about Roxy and Charlie grows forcing her to turn to Vincent for help but she soon has second thoughts and asks him to leave. Wanting to regain control, Ronnie comes up with a plan to find out what they’ve been up to and is devastated by what she learns. Meanwhile, Charlie and Roxy go for coffee and he tells Roxy he wants his marriage to work. Back home, the pair are confronted by Ronnie but they assure her they’re no longer having an affair. Ronnie pushes on with her plan and asks Ben and Abi to prepare a dinner for Roxy and Charlie to say sorry for her accusations. Once alone, Roxy assures Charlie everything is okay and the old Ronnie is back but they are unaware of Ronnie’s plan.

Shabnam announces that Carmel is on her way over to help plan the wedding but with his grandchild playing on his mind, Masood refuses to help. After some words from Tamwar, Masood changes his mind and after handing in his notice at Beales, returns home to help his daughter. With Carmel taking over the wedding plans, the tensions begin to rise and a frustrated Shabnam and Carmel come to blows over an engagement party. Over at The Vic, Kush tells Shabnam he’s worried they’re in too deep and can’t go through with the wedding but Shabnam apologises for her behaviour and promises to make more of an effort and agrees to an engagement party. Back home, Masood prepares for the first day of Masala Masood but he also prints off the address to find his granddaughter …

Elsewhere, a guilty Phil does his best to help Lola get her job back but when the calm approach doesn’t work, Phil decides to fix it his way and confronts Shirley. Sharon and Kim put their plans into motion to open separate bars. 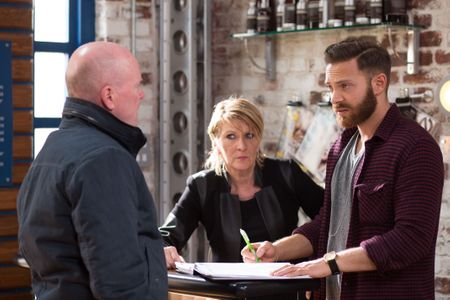