Moira informs a shocked Paddy that Aaron is hiding out at the farm. Paddy heads straight over there and is overjoyed to see him, throwing his arms around him. They are both emotional to be reunited.

Adam and Aaron plan to go on the run together, fearful of Marlon shopping them to the police. Cain makes a plan, sorting a safe car and ferry tickets. But his plans are scuppered when the police show up, having found Aaron’s fingerprints on the stolen car.

Ross thinks Aaron is to blame for everything and goes on a rampage to find him. A brawl breaks out in the Woolpack.

Marlon cannot believe Donna’s corruption and confronts Ross, believing he must have blackmailed her. He doesn’t want the truth about Donna’s dodgy dealings to get out.

Vanessa goes out hoping to meet the man of her dreams. 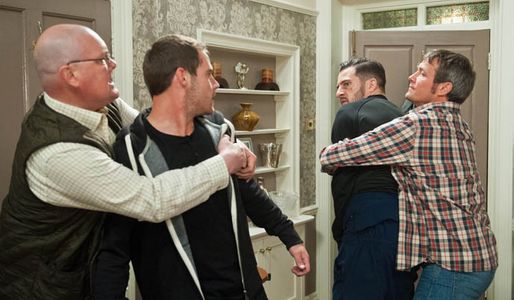