With Phil in a bad way, Sharon starts to make plans for a special Christmas Day but is taken back when Phil demands that he spends Christmas alone. Torn, Sharon pays a visit to Linda for advice and comes up with an idea and she later shows Phil his present – a fancy armchair. Sharon is disappointed by his reaction but starts to understand Phil’s point of view; this could be his last Christmas and he needs space. Later on, Sharon holds a family meeting to announce she’s booked a pub lunch for Christmas Day so they can leave Phil alone. Louise protests the idea but Sharon tells everyone they need to face reality – Phil might not get a donor in time and they need to respect his wishes. However as Sharon leaves, the reality hits hard.

Ronnie grows exhausted at Roxy’s attitude. Over at The Vic, Mick worries about Linda when she refuses to do their traditional grotto and turns to Jack for help. Mick soon comes up with an idea to get her in the festive spirit.

Linda clocks on to his plan but will it work? Elsewhere, Carmel arranges a Christmas party for the market traders. Stacey and Martin are annoyed when Ian refuses to give Martin time off for Lily’s Nativity Play.​​ 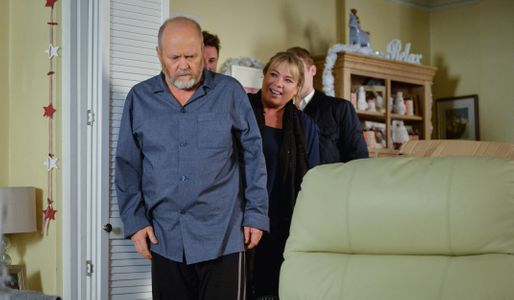 Eastenders 12/12 – Will the Beales be reunited for Christmas?