Ross is shocked over Donna’s death and broken by news of her illness, heartbroken she didn’t confide in him. Riddled with guilt over how she died and confused over her feelings for him, he decides he needs to tell Marlon the truth, but can he go through with it? Debbie feels for Ross knowing the truth of his situation.

Marlon is faced with the impossible task of telling April her mummy is gone. He explains to her that Donna has gone to be a superhero in the sky.

Prodigal Aaron turns up at the Dingle’s hoping to stay the night. But when the police arrive for Cain in connection with a stolen car, it’s clear there is more to Aaron’s reappearance than meets the eye. Down at the station, Cain watches CCTV footage which clearly shows Aaron and Adam’s handiwork. He is furious and demands to know more of what they were up to.

Megan is determined to expose Charity’s ‘affair’ and asks Jimmy to be her spy!

A devastated Bob is struggling to come to terms with news of Donna’s death and secret illness. 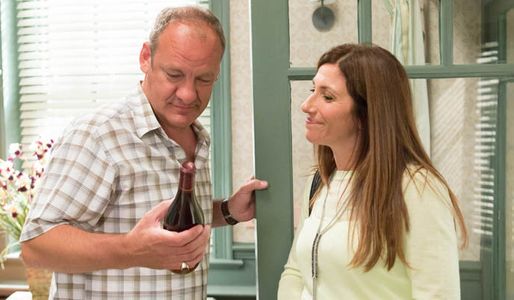