Moira’s left unsettled after Cain is disappointed to have to defend himself again over Charity. Moira is awkward and realises Cain lied about a meeting and has gone to see Charity despite everything. At the prison, Charity is relieved when Cain arrives to see her. But their meeting doesn’t go well…

Later, Cain heads off to a scruffy-looking house where he meets Joanie and gives her some money for a deposit but insists he doesn’t want to see or hear from them ever again. Meanwhile Moira makes a decision but will it be game over if Cain finds out?

Guilty Finn begs Emma to let the past go and confesses it was him who told James. He engineers a date between Emma and the Doctor who later realise they’ve been set up.

After Robert reveals Cain might know where Adam and Victoria are hiding, Private investigator Harriet begins following Cain, but is stalled by her broken-down car. Meanwhile, Robert’s pursuit of Victoria raises Chrissie’s suspicions when she sees him giving Ross money to fix the car.

Kerry’s disturbed to see Dan engrossed in his college assignment. Kerry secretly begins to copy Dan’s work from his laptop but is caught out by Amelia. 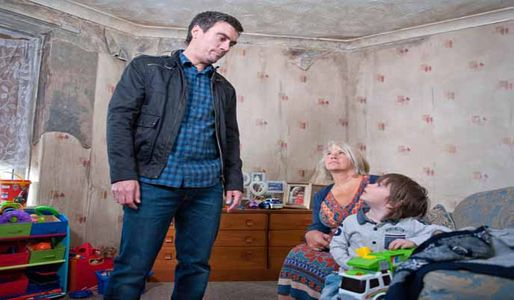