Emmerdale 01/01 – A dark turn of events for Lachlan

Belle heads to Home Farm, looking for more pills as Robert heads to see Aaron. Lachlan is nervous as Belle urges him to try one of the pills with her. Lachlan struggles with the effects of the legal highs and as Belle prepares to tell him everything, Lachlan starts fitting. Elsewhere, Zak reveals to Lisa that Belle was behind Edna’s burglary but are shocked when Belle returns, panicking and admitting that Lachlan is going to die. Meanwhile, at Home Farm, Lachlan lies motionless, out cold.

Later, at the hospital, Chrissie’s thrown when Belle admits Lachlan was the dealer. Belle blames herself for Lachlan’s fit, insisting she shouldn’t have told him her secret. Meanwhile, Chrissie’s furious Robert left Lachlan and blames him for what happened. Is Robert playing with fire and could he lose Chrissie? And just what does the future hold for disturbed Belle?

A downhearted Finn presses Harriet for information about his Mum and Ross is thrown when he learns today was Donna’s birthday. Finn’s heart goes out to Ross who denies his feelings. However, Finn is later left stunned when Harriet reveals she has some news – she has found his mother. Perhaps now Finn will finally get to meet his mother.

A tipsy Paddy boasts about his winnings at the races, leaving Pearl quietly seething at her missed opportunity. Pearl’s determined to win her money back but will it be Paddy who’s left out of pocket?

Aaron tries to hide his hurt when Robert insists their affair will end once he’s married. Pete is gutted when David lets him go from the team and recruits Rakesh instead. David realises he has made a mistake getting Rakesh involved with football training as he’s far too heavy handed. He begs Pete to come back but will he? 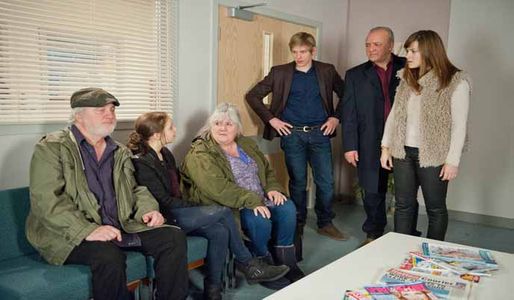