Lawrence is troubled to think Lachlan was secretly filming Bernice but they're even more shocked when Chrissie admits it was her. Chrissie’s incredulous when she learns Lawrence gave Bernice permission to stray whenever she wants and she's left aghast to think he had a similar arrangement with her mother. Chrissie wonders if her father is gay and if he’s her real biological father, leaving Lawrence horrified. Meanwhile, Andy is shocked to hear of Chrissie’s honey trap and quits.

Pearl’s hurt when Paddy tells her she has to move out. Talking with Marlon, Rhona tells him that letting him go might have been the biggest mistake of her life. There's a moment where they’re about to kiss...

Robert tries to convince Chas not to tell Aaron the truth about the new witness but the choice is taken out out of her hands when DS Wise tells them they can now charge Gordon and Aaron resolves to go ahead with it.

Joanie thinks she should find herself a job as Dan wants more rent but Zak has a plan. 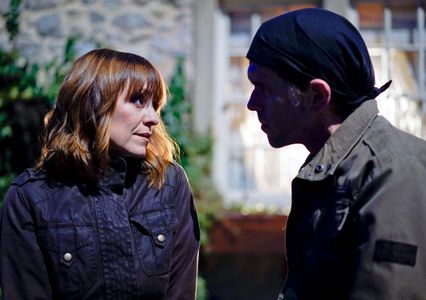