Dan watches as Ali and Ruby pack up their house. Amelia remains insistent she's not moving to Liverpool, as her dad needs her more than they do. Later, Dan's worried when Ali and Ruby arrive looking for Amelia, who has gone missing. Harriet has an idea where she could be and soon Dan and Amelia try and work things out. Kerry is suspicious about what's going on. Before long Dan explains to an astounded Kerry, he’s going too.

Doug arrives and sees Marlon's bruised face who tries to remain positive explaining Laurel has finally agreed to see a doctor. Laurel's shocked when Dr Cavanagh refers her to a detox centre. Rhona and Paddy make plans to keep Leo away from them and are shocked to learn she hit Marlon. They then are worried to realise she hasn't yet admitted to being an alcoholic. Later, Marlon arrives to spend time with Laurel, telling her how proud he is that she's getting help, unaware Laurel isn’t being entirely truthful.

Bernice is disgruntled Jimmy can't see past Tracy but he’s enjoying her fussing over him. Soon Bernice is accusing Tracy of being a thief. A hopeful Vanessa tells Rhona, Adam has promised to back off but is he? Bob feels for Carly but an angry Brenda soon interrupts a touching moment. With Carly and Brenda still antagonising each other and Carly feeling she’s lost ties with Bob, Vanessa makes a helpful suggestion. 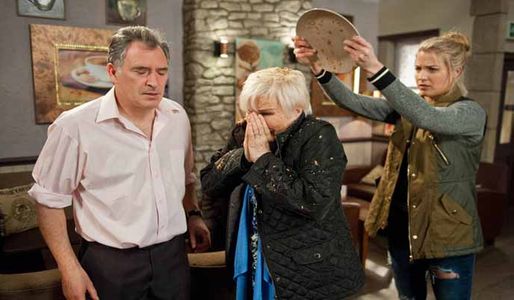