Debbie and Chas are anxious about Cain’s whereabouts since he walked out, worried he could have gone off the rails. Chas guiltily admits she had known the truth about Adam for sometime. Moira is pleased when she sees Adam arrive at the farm but it soon becomes clear he will not make things easy. Later, Debbie and Chas prepare to set off in search of Cain and Debbie makes it clear Moira is not welcome to tag along.

Jai tries to apologise to Megan for choosing Leyla to invest instead of her, but Jai soon begins to doubt his decision when Leyla swans about lording it up at the factory. Leyla’s incredulous when Jai tells her she is still going to be working on the factory floor, offering her a contract to sign. Leyla is furious and promptly rips up the contract telling him he can say goodbye to her investment. Later, Megan is intrigued to hear Leyla told Jai to stick his job and investment.

Elsewhere, Diane is shocked to discover Bernice’s new boyfriend is Andy when she walks in on them kissing. Priya is keen for Rishi to set up meetings with potential husbands but Rishi wants the whole family to be on board. Lisa and Zak are hopeful when they’re given permission to appeal for Belle but worry about Sam who has been distant recently, suspecting he might be up to something. 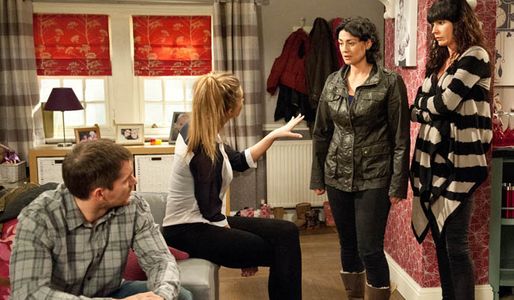